Teaming up with the NBA basketball star

You could say that Russell Westbrook has signed for two new teams this year – in basketball, he joined the Houston Rockets, after spending his earlier career playing for Oklahoma City Thunder; and in fashion, he teamed up with Swedish brand Acne Studios, and starred in its spring-summer global campaign. Now Westbrook is back, helping to launch a new autumn-winter menswear capsule collection for the brand. This is said to reflect both the world of the eight-time NBA All-Star and the distinctive character of Acne Studios, focusing on denim and its ability to express personality. 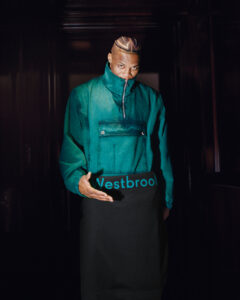 In a palette of light blue, teal green, white and black, the capsule includes outerwear, shirts, jeans and shorts. The half-zip windbreaker gets a denim update and features a large patch pocket on the front and drawstring hem, while the denim utility vest has oversized pockets on the front and piping along the seams. A denim short-sleeve shirt takes its cues from sportswear, with distinguishing seams down the wide placket. The jeans are straight-leg with five pockets, and the denim shorts longer in length. For Westbrook, this was a chance to explore his creativity. “Acne Studios is already an unbelievable brand that speaks for itself, so I’m just happy and blessed to have a collection with them, and to be able to show my creative side,” he says. The Russell Westbrook x Acne Studios collection launches in selected Acne Studios stores and online, and exclusively on highsnobiety.com. In Dubai, Acne Studios items are available in branches of Boutique 1 at Mall of the Emirates and Jumeirah Emirates Towers.